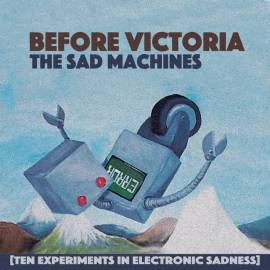 I’m on an album! The Sad Machines is an electro concept album all on the theme of depression. It has spoken word tracks which pack even more or a punch with a backing of synthy music which swings between hypnotic, heartbeaking and the kind of badass where you need a long coat billowing in the wind and a choreographed fight scene.

Before Victoria is the musical side-project of the infinitely huggable Marc Burrows, better known as one quarter of steampunk anarchists The Men That Will Not Be Blamed For Nothing.

My track is I Called You Captain, from a poem I wrote a few years ago about that moment when a relationship/friendship/houseshare is falling apart and the scales start to fall from your eyes. I always thought it was one of my strongest pieces, but also too depressing to slam and I never felt like I’d quite found a home for it before. All of which is to say: it’s an absolute fucking delight to see it so much richer with the musical backing – let alone to be among such awesome company.

Marc’s said his tracks on the album are some of his most raw and honest writing to date – including a diary entry from when he was in a mental health unit, and tracks made with spoken word artists including JoJo Lazar, Nicoletta Wylde and me, as well as Laurie Black and Blamed for Nothing bandmate Andy Heintz. I’ve loved the Men That Will Not Be Blamed for Nothing for years, so it’s a huge honour to be on the same record – which is available on MP3, CD, and vinyl.