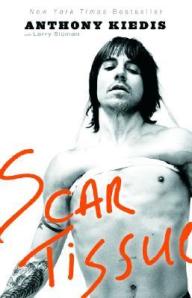 I’m about halfway through and I’m reconsidering how much I like the Red Hot Chili Peppers. Their front man is such a douche.

Anthony Kiedis did a lot of wild/asshole things, but as he re-tells them he runs through each anecdote at a bored, breakneck speed – only sketching the barest of facts: “I did this substance and I did that substance, I caused X bit of destruction in Y place and then I cheated on my girlfriend with this sweet, dark-haired girl. I like dark haired girls. Then my girlfriend was mad at me…” all with no emotional engagement with the facts.

I’m not saying I want him to be wearing sackcloth and ashes, it’s just that he really never gets outside his own actions, or – indeed – inside his own head. As a reader you’re never there with him, you’re being taken on a guided tour of his past and Kiedis has run through all these anecdotes so many times that he’s on autopilot.

It’s a worn-out script. He’s a douche. And if he’s this bored retelling it, then that same boredom rubs off on the audience.

Oh, and he thinks his grandmother being some small fraction Native American explains why he’s so spiritual. Excuse me while I snigger.