This article originally appeared in Bad Reputation – a feminist pop-culture adventure on 11 January 2012.

Ladies and gents, I have a confession: I watch the crappiest, most sensationalist reality shows and ‘documentaries’ – as long as I think no one’s looking. However, my latest one is so bad and so compulsive that I’ve forced at least three friends to watch episodes with me. It’s car crash TV, it’s Two Minutes Hate strung out for 45: it is Channel 4’s Sorority Girls.

Described by one friend of mine as ‘hate crack’, Sorority Girls is a reality TV show based around five girls from American sororities doing the standard reality TV show whittle to find their perfect ‘sisters’ in the UK and form Britain’s first ever sorority. That’s right: it’s The Apprentice for female friendship. Didn’t realise you had to jump through hoops, sing songs and outperform others to be friends? Think again.

What Are Friends For

In the ‘Greek system’ of sororities (sisterhoods) and fraternities (brotherhoods), people in colleges in the US can apply to join a sorority or a fraternity (each is represented by various Greek letters) – a combination of accommodation and social activities which – they keep telling us – is where you make friends for life.

However, obviously not everyone wants to be friends with everyone – so there’s a selection process. In Sorority Girls it begins with an interview in which each potential new member (or ‘PNM’ – this thing has more jargon than a pick-up artist convention) is interviewed about themselves by the five, identically-dressed, rictus-smile-wearing members. Questions include “Can you talk me through your outfit?”, “Can you show us your best dance move?” and “Do you think we’re heading for a double dip recession?” Seriously, WTF? EXPLAIN WHY YOU WORE THOSE CLOTHES! DANCE FOR US, MONKEY! NO, HONEST WE’RE INTELLECTUAL!

If you get through this hoop, you’re allowed (gee, thanks) to pledge your loyalty to the sorority, and you become a ‘pledge’ – not to be confused with a fully-initiated sorority sister. YOU HAVE AGES YET TO GO. REPEAT: AGES.

At this stage, you get the hazing. Interestingly, Channel 4 avoided the h-word for the whole series. Fraternities especially are infamous for their often-dangerous hazing – usually mixes of brutality, alcohol and stupidity – and stories of student deaths are sadly all too frequent. However, though sororities are not completely free of violence, in the main their selection processes are known for being far more about judgement, humiliation, and policing each others’ behaviour. All for the grand prize of… being friends.

Don’t know about you, but I don’t want friends that’d do that to me.

Though bitchiness and drunken stupidity have probably always been facts of life at universities (as elsewhere), the focus on controlling each others’ behaviour wasn’t always what sororities were about. My grandmother was the chair of her sorority (Delta Phi Epsilon, known as ‘Dogs, Pigs and Elephants’ to those that didn’t like them) when she was at NYU in the 1940s, but in the 1940s, after some pretty mild/vaguely titillating humiliation for a week (be a sorority sister’s ‘slave’ for one day, dress up ‘French’ – i.e. short skirt and a beret – the next) you were in the club. And then you had a home-from-home at a time when most women at university were still living with their parents. It was more… necessary, if that’s the word. Its role was mostly in facilitating female students having some freedom in a safe space (once people were in the club they went out drinking and dancing frequently).

By the 1970s (when my mother was at university in the States) sorority and fraternity membership was waning and seen by many as old fashioned and uncool, but from the mid-1980s onwards a revival has been going on, in much the same time period as the rise of the Christian right wing. Though religion and politics are never explicitly mentioned in Sorority Girls, the girls do seem to be preoccupied with furthering a socially conservative (chaste, sober, uncontroversial) set of values under the disguise of helping the pledges ‘develop’ and ‘improve’ themselves.

In the selection process of Sorority Girls, pledges are admonished for wearing too much make-up, for having two drinks in their hands at once, for having a hint of ‘attitude’, for being too loud, for being too quiet, for not getting on well enough with the specially-shipped-in frat boys, for getting along too well with the frat boys… In other words it’s the worst of Queen Bee girlie bullying behaviour. The worst put-down these girls have seems to be ‘that’s inappropriate’ – but at the same time, what is appropriate isn’t particularly clear. One girl got thrown out for questioning why, if fake eyelashes were banned, fake nails were still allowed.

It’s Mean Girls. It’s The Heathers. It’s high school crap, but in my experience, by the end of school (and certainly by uni) social groups had diversified enough that we were done with that shit. If the Queen Bees didn’t approve of me at age 13, they could try (and often succeeded) to make my life miserable. If they didn’t like me by age 17: Meh. Shrug. Fuck’em. I had friends and interests far away from their spheres, and likewise I think they’d often also either grown up or moved on, because all of a sudden we were all just people. Classmates with more going on in our lives than our clothes, deportment or how we wore our hair. I see most of the behaviour on Sorority Girls as a flashback to the bad old days of my early-to-mid-teens, and it depresses me beyond words that so many young women willingly submit to this – putting themselves through this self-esteem grinder – in the hope that they will be let into the club so that they too can become as composed as their frenemy tormentors.

There are also elements of the induction on the programme which appear to be cult-like brainwashing (regular sleep disruption, fake kidnappings, physical trials, deliberately bringing people emotional highs followed quickly by lows) as well as possibly encouraging a kind of Stockholm Syndrome. One ritual involves the girls holding Greek letters made of ice to their hearts until they’re melted – ‘as it burns you, so Sigma Gamma will always be burned onto your heart’. At one point (in front of their families) the would-be members pledge their commitment to the sorority above family, and by the end, cheerfully chant and praise and dance at the drop of a hat. 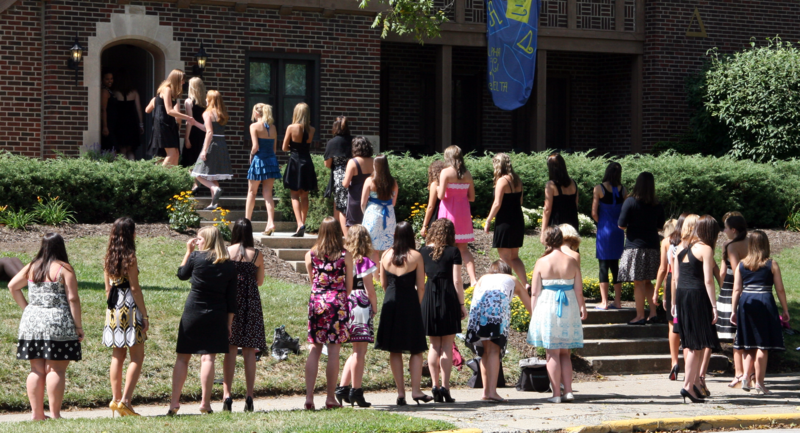 A “sorority rush” queue on Purdue University’s Panhellenic Association Sorority Formal Recruitment day. Apparently even if you can pronounce all that in one go without stumbling, you *still* don’t necessarily get in.

Also, let’s talk about males and double standards. Fraternities are famed for their heavy-drinking, womanising, loud & loutish behaviour, while sororities are famed for their bitchiness and ladylike reserve, but at the same time – despite their apparent lack of shared ground – sororities and fraternities view each other as safe and approved. By definition, it seems, frat boys are ‘nice boys’ no matter what their (individual or group) behaviour says to the contrary.

Frat boys were drafted in at one point in the show to ‘kidnap’ the girls (sling them over their shoulders and run off with them), get the girls drunk and hit on them. The girls who then seemed to enjoy their company too much were admonished for their ‘obscene’ behaviour. However, the one girl who wasn’t a fan of the frat guys and didn’t mingle with them was told off for being ‘cold’ and ‘unfriendly’.

In another stupid task the girls were taken to a town centre and told they had 20 minutes to find a ‘date’ for an event that evening. Regardless of attraction, they needed a man because they had been told to go find one – fast. Some of them already had boyfriends, and some of them had to ‘make do’ or bargain that they’d buy the guys lots of drinks. This was not about any woman’s happiness or enjoyment so much as about proving to the other women around them that they were desirable to the opposite sex. The one pledge who made the cardinal sin of taking one of these dates back to the sorority house was in a lot of trouble: you’re not supposed to be sexually available, only sexually desirable.

This worldview sees women as gatekeepers of virtue who are whores if they say ‘yes’ and unfriendly if they say ‘no’- leaving them to walk a tightrope of chaste, respectable (never flirty) friendliness upon pain of losing their ‘friends’ if they are not representing the sorority well. Oh, yes – you’re always representing your sisters. Your actions are never yours alone but a representation of the whole group, and therefore anything you do is up for analysis (‘you’ve let me down, you’ve let the sorority down, but most of all: you’ve let yourself down.’)

The final episode of Sorority Girls revealed the final five UK ‘sisters’ of Sigma Gamma, and rang especially hollow. The grand prize each girl had won was…. four ‘friends’. Four friends who had been selected by committee. Throughout the process the most interesting and lively girls were often cut. The American ‘sisters’ cited Kate Middleton and Jennifer Aniston as their ideal sorority sisters, and that blandness carried through. Nothing against Kate Middleton and Jennifer Anniston personally – I’m sure you’re nice – but these are women who are often photographed but rarely heard, and best known for marrying much more famous men. Surely you/I/we can all do better than that?

So, Sorority Girls: hard to tell how much was TV producers deliberately creating a young version of The Stepford Wives (surely they didn’t look that dead behind the eyes on the first take) and how much was ‘real’, but I’m pretty sure any sorority would never want yours truly, and likewise I would never want them.

So why the hell can’t I stop staring?!