This review originally appeared on Fat Quarter on 25 November 2009. 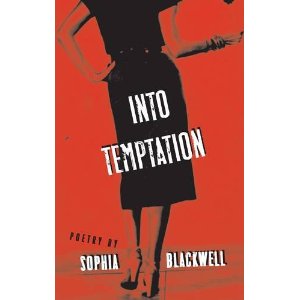 Into Temptation – Poetry by Sophia Blackwell

Into Temptation: Poetry by Sophia Blackwell

“Gay Rage was my teenage agenda,
my mates talking race, class and gender.
We’d get in frantic states
and semantic debates
when some poof called some gaylord a bender.”

This is my current favourite excerpt from Into Temptation, a collection of 27 poems by open-mic regular Sophia Blackwell. Described in her own words as a “performance poet, cabaret vamp, burlesque wannabe, feminist lesbian warrior princess and Italian pasta-momma” – all I can add is to say if they taught poets like this in schools, I’d never have to cringe when that conversation comes along and I admit that what I like to write ‘actually, kind of includes, um…’ (gulp) ‘…poetry.’

Treading a brilliant line between the tender and the gutsy, Into Temptation is split into three sections: Mad Love, No Angels and Ordinary Joys. It has a wealth of experience in life and love, a devil-may-care attitude which glows through the collection, and an anger directed in all the right places. I’d challenge anyone to not fall a little bit in love with this book.

Sophia Blackwell is an accomplished performer, and having seen her live a few times I occasionally wasn’t sure if I was enjoying the words on the page so much as the live delivery I could imagine as I read them – but either way the influence of having honed these in front of live audiences is apparent: these poems are tried, tested and the rhymes and flows are polished to a sheen. In ‘Wilderness Years’ the sheer verbal feats, let alone what they express, are thrilling:

“I like when this world in its hugeness astounds me,
amuses me, bruises me, screws and confounds me.
I smile as its brutal great beauty surrounds me
I’m free in these wilderness years.”

In the few poems which didn’t make me grin from ear to ear, the sheer skill involved was breathtaking, such in ‘Paris in the Spring’ which with tells one story one way, but then repeats with the order of the lines reversed, telling a completely different story. Pieces such as ‘Wilderness Years’ or ‘Red Dress Blues’ have an almost anthemic feel about them – a neat summation and celebration of life for the generation of women that has no intention of waiting until they are old to start wearing purple. Or red:

“I don’t give a damn what the preacher said,
I’m reeling from a night in a stranger’s bed,
that face above me like a figurehead.
My dress has to be red.”

Singing out from this collection is an epic personality. The type whose quips should be immortalised in amongst the quotes from Noel Coward, Dorothy Parker and Mae West. Calling all smart bookish girls aged seventeen or under: throw away your Frieda Kahlo postcards and your dreary Sylvia Plath: I’ve found someone better. All those of drinking age – catch her at a poetry night sometime soon.