Hooray for Hollywood is an innovative and harrowing piece of theatre, which uses live actors and puppets to tell the story of one child’s experience of the child pornography industry. This is one of those rare pieces of art which really can and will stay with you, and has the power to change lives. 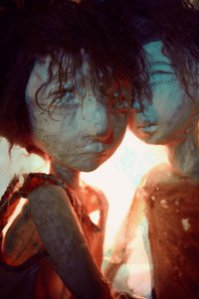 Puppets from Hooray for Hollywood

The small puppetry stage only shows the adults (live actors) from the hips down, an ingenious and powerful device, which puts the audience on the (puppet) child’s level – seeing the world, literally, from their perspective. The only dialogue is from the adults – the little glimpses and overheard parents’ phonecalls and conversations. Meanwhile, a live violin performance conveys all the emotion – from mournful melodies to scratching, screechy tension.

I was a little surprised the play started where it did – with the girl’s mother arranging for her daughter to “get her picture taken with this cute little boy” while she goes off for a coffee with the other child’s mother. I initially wanted to learn more about how and why even that was happening, but the play doesn’t dwell on that – just showing what the child sees. The play also portrays the slide very starkly: staged across a number of years, from the initial excuses that the child’s “too young to remember anything” to the chilling phonecall “how much? … bring her back in one piece … numb her up.”

In Hooray for Hollywood the vast majority of the abuse happens off-stage. In one scene, as one girl is led offstage, the protagonist stays crumpled on the ground. Watching this I was waiting for the next ‘thing’ to happen, but realised that this was it: the waiting. The dread and the powerlessness.

The discussion after the play (normally chaired by Childline) was harrowing in a whole new way. The writer and director Raven Kaliana explained that the play was based on her own life. She seemed so level-headed and often chirpy that the things she said almost jarred more: that she had been deliberately blocked by (presumably bribed) police when she went to report it, that her mother was a social worker. That she had witnessed snuff films being made. My blood ran cold as each new detail emerged. It was extremely challenging to accept that these things actually happen – and here’s a survivor of it. In front of us.

There are no words, but almost wordlessly – this amazing piece of theatre conveys and sheds light on the world of abuse and trafficking, and opens the door for much more to be done about it.

It’s on until Sunday and believe me: theatre has never been so important.

Hooray For Hollywood from James TheHat on Vimeo.